The 8 Best Pubs in Maine! 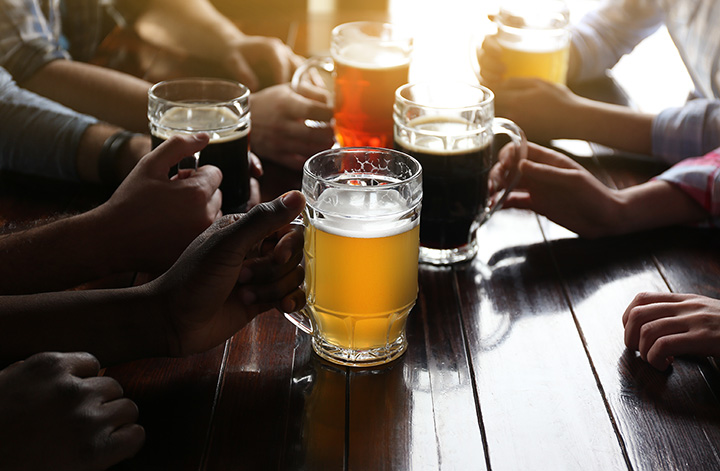 With a strong Irish and English heritage, Maine has many awesome pubs throughout the state.  These pubs serve up award-winning craft beers and traditional pub food with their own unique twists. Maine’s best pubs are the perfect spot to crack open a cold one with good friends. Catch live music, great drinks, and good times at these 8 great pubs in the state.

The Run of the Mill Pub, Saco, ME

Located in an old historic mill, the Run of the Mill Pub in Saco is a 14-barrel brew pub that handcrafts over 29 varieties of ales and lagers throughout the year. The food is hearty and pub-style so you won’t leave hungry. If you want something in a bottle, the pub has a great selection of ciders, wines, and other beers.

Gritty’s is Maine’s original brew pub established in 1988. With locals in Portland, Freeport, and Auburn, Gritty’s is a popular pub. If you’re a diehard fan of Gritty’s, you can even join their infamous mug club. In true English pub fashion, Gritty’s pours classic English-style ales and serves food like fish and chips and shepherd’s pie.

Bull Feeney’s is an authentic Irish pub and restaurant in the heart of Portland’s Old Port. With two bars, Bull Feeney’s serves local craft and imported beers and has Maine’s largest selection of single malt Scotch and Irish whiskies. The restaurant serves homemade steaks, seafood, and hearty Irish dishes. It’s the place to be on Saint Patrick’s Day!

Opened in 2011, Rock Harbor Pub and Brewing Company has taken the Camden/Rockland area by storm. The 16-tap pub has a rotating list of beers on tap with between five and 10 being their own ale-style craft beers. The food is gourmet pub-style with dishes like Shepherd’s Pie and Haddock Rockefeller.

The Liberal Cup, Hallowell, ME

The Liberal Cup Public House & Brewery is a traditional English-style pub in historic Hallowell. With an inviting and cozy atmosphere, the Liberal Cup has delicious classic pub fare made with local ingredients and handcrafted, brewed in-house ambers, IPAs, porters, and stouts.

Dubbed by many locals as their “home away from home,” Geaghan’s Pub & Craft Brewery in Bangor serves local craft beers and imported beers from the Old World. The brewery makes 13 different kinds of beer including their popular Bangor Brown, Smiling Irish Bastard, and The Refueler. The food is just as good as the beer.

Launched in 1996, the Kennebec River Pub & Brewery was founded by Northern Outdoors Adventure Resort, which hosts whitewater rafting and other northern Maine adventures. The pub has seven different ales and lagers on tap, including Whitewater Wheat and Magic Hole IPA. And, don’t forget about the tasty food menu!