The 10 Best Bars to Celebrate the New Year in Maine! 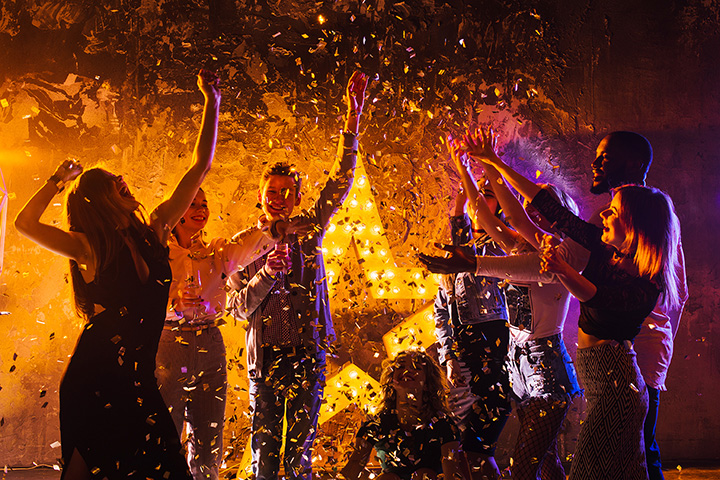 You’ll find most of Maine’s biggest New Year celebrations in its largest cities, like Portland and Bangor. Home to the most bars, Portland is the epicenter for a dance-filled night out on the town. But, don’t forget about Bangor to the north and Kennebunk to the south. Wherever you to go to ring in the new year, you’ll be sure to find a bar that will fill your flute full of champagne!

Established in 2014, Arcadia National Bar, a unique fusion of bar and arcade, is a local Portland favorite. From 8 p.m. to 1:30 a.m. on New Year’s Eve, you can nerd it up with free games, pumping music, snacks, and drinks. Tickets must be purchased in advanced and there are even discounted sober tickets for your DD.

Head to Ri Ra Pub’s annual Black and White NYE Party for one of southern Maine’s largest NYE celebration. Starting at 10 p.m., you’ll enjoy complimentary appetizers, a dessert buffet, and a champagne midnight toast countdown. While Black & White attire is suggested, it’s not required. There will be a DJ pumping jams until 2 a.m.

@dapgents are on right now. AmaZing music for a Sunday afternoon at our oyster festival.

3. Portland House of Music, Portland, ME

Celebrate 2018 at the Portland House of Music with the Maine Dead Project, a Grateful Dead cover band who will play all your favorite jams. Music starts at 9 p.m. and they’ll stop for a midnight countdown before jamming some more. It’ll definitely be a good time!

Celebrate New Year’s on the southern coast of Maine at Jonathan’s famous upstairs/downstairs party. Enjoy a delicious five-course dinner downstairs in the restaurant followed by a night of dancing, a champagne toast, party favors, and music from the Beatles Experience Band in the Upstairs Ballroom.

Eventide Oyster Co. is one of Portland’s top award-winning restaurants and each year they host a top notch New Year’s Eve party. Now in its fifth year, expect appetizers, an ice luge, a champagne toast, caviar specials, and a dance party that lasts until the DJ spins the last song.

All alone. Just me and "The Rock" @eventideoysterco one of my favorite restaurants in America. Eat local.

Empire is not only one of the best Chinese restaurants in the state, but is a live music venue. Grab some dinner beforehand as you’ll need your energy and head to Empire at 9:30 p.m. for a night of non-stop dancing with DJ Scroll. Tickets are just $15.

Head straight for the Downunder Club in Bangor’s Seasons for the ultimate NYE party in the Queen City. Maine’s premier dance band, Tickle will be playing from 9 p.m. until midnight where you’re treated to a champagne toast and countdown.

Don’t miss the New Year’s Eve Ultimate Dance Party at the Spectacular Event Center in Bangor. With two rooms playing music, you’ll have your choice of Today’s Hits with DJ Bill Lyons or Country with DJ Terran Stone. Each ticket includes hot and cold appetizers and a champagne toast at midnight. There is even a photo booth to add some fun!

As one of Maine’s top nightclubs, Mixers Nightclub & Lounge knows how to throw a party. Join them for a night of entertainment with Whiskey Militia, a country band. Between sets, DJ Ron will play all your favorite dance mixes from the past four decades. There’s a midnight buffet and a midnight champagne toast.

Federal Jacks Restaurant & Brewery in Kennebunk has a great New Year’s Eve celebration with no cover charge. There is select $2 pint specials, a specialty drink menu, live music, and lots of dancing until 1 a.m. There’s even a complimentary midnight buffet and champagne toast. Don’t forget to bring your dancing shoes!